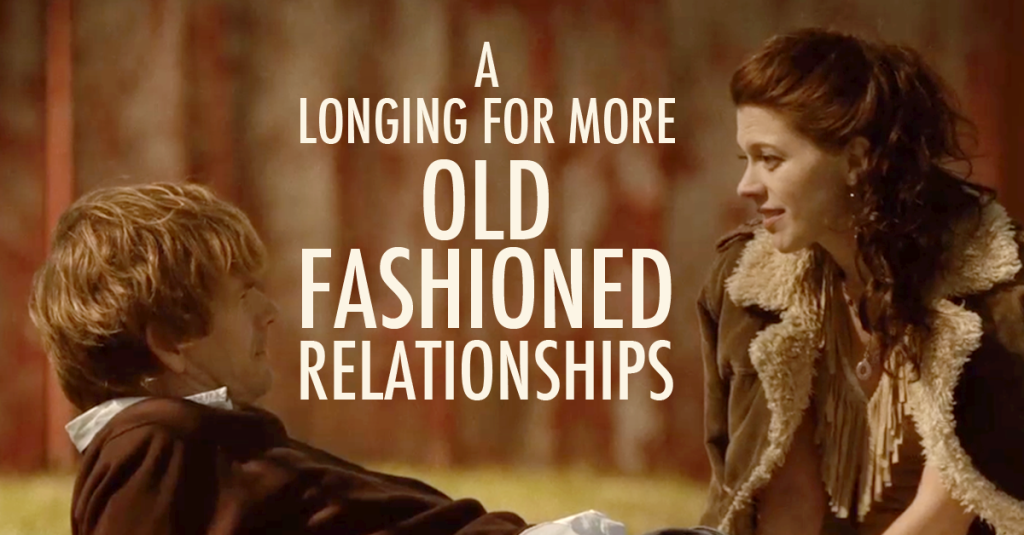 The last post featured the author of the Old Fashioned novelization, Rene Gutteridge.

Today, it is my pleasure to introduce the author of our non-fiction, companion devotional, The Old Fashioned Way: Reclaiming the Lost Art of Romance.

Ladies and gentlemen, the one and only Ginger Kolbaba…

When I was in the fourth grade, my teacher, Miss Raymond, asked the class about the future and what would happen if we ran out of energy, oil, and electricity. She was looking for us to be creative about other ways that we could survive.

I knew the answer and I was thrilled to share it. “We could go back to the way things were in the 1800s. With horses and buggies and stuff.” I thought it was clearly brilliant; Miss Raymond did not.

Looking back these many moons later, I am no longer thrilled with the prospect of returning to the days when we had no air conditioning, cars, or DVRs that can record endless episodes of Downton Abbey. While I may not want to travel around on horseback, there are a few ways that I do still agree with my younger self who saw value in the way things used to be. I yearn for the days of good old fashioned relationships. When front porches were used to sit out and greet neighbors passing by. When a handshake meant the same as a contract signed, witnessed, and notarized. When saying “I do” meant “until I die.”

So when the Tyndale editors and Rik Swartzwelder asked me to write the nonfiction counterpart to the movie Old Fashioned, I jumped at the opportunity. In writing 40 days’ worth of reflections on different “old fashioned” values, such as chivalry and kindness and honor, I was able to share vulnerably what those issues mean to me—someone who has yearned to do things right, but who has too often missed the mark, and who is grateful for redemption and second (and fifth and twenty-seventh) chances. I wanted to fill the pages with grace, encouragement, and hope—and even a bit of challenge.

Obviously the “good old days” weren’t always so good. Neither have we arrived at the pinnacle of knowledge in our society today. But I do think we can harness what was good about yesteryear’s and today’s mores and use them to become the kind of people who overflow with the beauty of Jesus in all our relationships.

That’s what I think about when I think of being old fashioned: I want to be a person who is respectful, who genuinely listens, who takes time to laugh and cry with others, who honors others, who forgives, and who focuses on the other person without having to check text and email messages every few minutes. Someone who lets a yes be yes and a no, no. Someone who lives by the Golden Rule: “Do to others whatever you would like them to do to you” (Matthew 7:12). Those are pretty good traits to have whether you’re riding a Mustang with a tail or one that has a Ford emblem on its front grill.

I love the fact that a book about reconsidering old fashioned virtues is releasing first in a digital format on September 1 and then in print on January 1. That’s what being old fashioned is all about—combining the best of both worlds. I’m blessed (another old fashioned word!) to be part of the Old Fashioned movement. I hope you’ll check out the book and let me know your thoughts at http://www.gingerkolbaba.com/.

Yesterday was a BIG day for Old Fashioned…

The eBook/digital versions of both the novelization of the film and the non-fiction companion devotional (The Old Fashioned Way: Reclaiming the Lost Art of Romance) were released by Tyndale House Publishers.

They can be purchased NOW at Amazon, Barnes & Noble, and cbd.com.

Print copies will be in stores in January 2015 (just before Old Fashioned lands in theatres on Valentine’s Day) and can be pre-ordered now via a wide variety of online retailers.

In honor of this milestone, today we have a very special guest blogger: Rene Gutteridge, the incredibly talented author of the novelization of Old Fashioned!  Enjoy…

When you’re a romantic comedy writer, people make assumptions about your personal life.  They believe my life is heavy on the romance and the comedy is thrown in for good measure.

The truth of the matter is that I’m so romantically illiterate that I shouldn’t be allowed to darken the door of any kind of existing romantic genre.  Looking at me, you probably wouldn’t guess it because I fix my hair and stuff.

But just toss a question out to my husband like, “Hey, on a scale of one to ten, where does Rene fall in romantic ability?”

When Sean and I got married nearly twenty years ago, I looked to be a very promising wife.  I loved all the things he loved, and I think he was particularly smitten with the fact that I played sports, loved action/adventure flicks and could pig out on nachos and hot wings just like any guy buddy.

When you’re a young man in your twenties, you think you might have found your dream woman.

But all that came to a screeching halt soon into our marriage when Sean tried to send me flowers.  We were on a very tight budget back then and they arrived at our doorstep on a Tuesday while Sean was at work.

For an hour, a dozen stunning, red roses stared back at me from the little bookshelf I set them on.  I studied them for a long time, biting my finger nail, trying to appreciate their beauty and wondering how much that beauty actually cost.

When he arrived home, after gushing about how kind that was of him, I somehow weaseled into the conversation the question about how much “…does a dozen roses cost these days?”

This kind of thing went on for a few years in the early part of our marriage (my squirmy inability to cuddle well, my complete ignorance about the power of poetry, my aversion to classic love songs) until one day Sean stood in our living room and declared, “I think you’re romantically challenged.”

Well at least we’d found a term for it.  And we dismally acknowledged there probably was no cure for my condition. I looked it up on the Mayo Clinic website. Indeed, the statistics were not in my favor.

Thankfully he still loved me anyway.

But as I went on in life, I ruminated about this peculiar problem.  What woman is romantically challenged?  How did that even happen? When did things go wrong? If romance was a stock option, women would rule the world—and I’d be totally broke.

I thought for a long time it might have to do with me being an absurdly practical person. Money on roses? Why not spend it on the water bill?  Sean would write me a poem and in return I would clean out his car to surprise him when he got up on Saturday morning. I don’t have to spell this out for you. Clearly I am lucky to still be married.

I think over the years my husband has subtly tried to help me out with this problem.  As much as I loved action movies, I thought it suspicious when he would insist on going to see romantic comedies with me.  We were of the Tom Hanks/Meg Ryan era of romantic comedies, and I saw every one of them.  Perhaps Sean was hoping against all hope I would at the very least recognize the Empire State Building observatory deck was amazing at night. (I say cold and windy, but please believe I’m trying.)

The thing that always drew me to writing and watching romantic comedy was the dysfunction.  That, I knew, was how love really worked.  Save it, Nicholas Sparks. I’m on team Sandra Bullock, where every romantic relationship is steeped in personality disorders.

I never bought into the idea of romance.  And I was sure I never would.  Romance, I thought, was just lame idealism, the world’s answer to the lack of loyalty and dedication to the hard part of life—real life—where people fail at sticking around at the first bump in the road.

Romance was, at best, unstable.

So I immersed myself in nachos, action flicks, and lacing my books with enough romance to get the general reader hooked and get me off the hook.

Then, along came Old Fashioned.

My longtime publisher, Tyndale, asked if I would read the script to see what my interest was in doing a novelization of it.  They said it was a straight-up romance.  To be polite and remain in good standing with all my editors, I excitedly agreed while secretly slumping on the other end of the phone.  I was hoping for a murder-mystery or something that didn’t involve flowers.

I opened up the script and began reading.

I was first caught off guard by the absolutely hilarious dialogue.  I leaned back in my chair, scratched my head, and thought, Huh. Romance writers can be funny. I had no idea. I thought they left humor to the romantic comedy writers.  I checked the name on the front of the script. It was a man who wrote this?

A twinge of jealousy struck me as I read on. I don’t like to be beat by a guy at anything, and certainly not romance.  But this guy had romantic chops.  This thing was the real deal.

I’d intended to sit and read for about thirty minutes or so that night, but I read it straight through, astonished at what I was feeling at the end.  Was I feeling…romantic?  Was I cheering on romance?  Was I rooting for what I thought I was rooting for…love?

Of course, the script did what writer Rik Swartzwelder intended it to do, which was challenge our modern world’s view of love and reintroduce a notion that hasn’t seen the light of day since perhaps Jimmy Stewart stopped making movies—chivalry.

And I suddenly understood that perhaps my own aversion to romance was itself drenched in the misconception about love and romance that had been ingrained in me since I was a child.  I realized that I certainly couldn’t live up to the hype of modern-day romance, love and sex.  What woman can?  We’re presented with flowers and chocolates and suddenly, no matter the guy’s intentions, we’re supposed to be every man’s dream.  We’re supposed to be more than a fairytale, mind-blowing in a way that puts Meg Ryan diner scenes to shame.

Though my husband never expected that from me, and in fact kindly accepted me as I was, I had put my own expectations on the notion of romance, and decided that I couldn’t possibly live up to the hype that came along with a box of chocolates.  So I rejected the notion of romance.

What a shame! What I have missed!

But I knew I had true love.  If Sean can love me through our rose fiasco, then I think it is love to stay.

And perhaps, if he ever decides to courageously return to his old fashioned, chivalrous ways, I will find within me the delight that I know it can bring, as it underscores that we’re lucky enough to have found the beauty of true love.

P.S.  Before I start getting mail about this, yes, we’ve read The 5 Love Languages, listened to the audio version, done the workbook, watched the small group DVD and attended the class at church.  I’m going to be writing Dr. Gary Chapman to let him know there are actually 6 love languages, the sixth being one that requires a mutant gene in the temporal lobe of the brain, but it’s still legit. Sean promises me I’m not the only female who failed the test in the back of the book.