I’ve been getting asked that question a lot ever since the press broke wide open when we announced we were releasing Old Fashioned the same day as Fifty Shades of Grey.

How did a little indie movie like ours—with no stars or exploitative elements—get major news outlets like Time, Variety, and MTV (among many others) to pay attention at all?

In reality, the only big thing we did was realize an opportunity and choose to be patient enough to not rush our film into its theatrical distribution (not an easy thing to do once a film is completed).  And then, we just let folks know about it…

We could have never predicted the immediate and explosive response that followed.

More than anything though, what that avalanche of press did for us was boldly confirm what is actually the answer to the much bigger question I’ve been getting asked:

Why did we pick a fight and choose to go toe-to-toe with a massive cultural phenomenon that is almost certain to completely crush us?

And that answer boils down to this… we suspected that the release of Fifty Shades was a unique moment in time and we also (correctly, thankfully) had the hunch that maybe we weren’t alone in our thinking that—deep down—a lot of folks out there hadn’t filled up on the Fifty Shades Kool-Aid and were indeed looking for something of a different flavor in both their romantic lives as well as their entertainment.

In short, we had confidence that the longing for innocence that is captured so uniquely in Old Fashioned might appeal far beyond church walls and the faith-based niche alone.

We’re not naïve enough to believe that means absolutely everyone will dig our love story or agree with us or be happy that we are challenging something as popular as Fifty Shades.

As to whether or not we’ll get beaten down (pun intended) in public by Fifty Shades on Valentine’s Day weekend.  Well, the odds aren’t in our favor… they weren’t in David’s favor either, when he went up against Goliath.

At the end of the day, if even one single soul is moved toward greater healing and wholeness rather than greater physical objectification or emotional damage—by our film or by the cultural discussion that is already happening because of our refusal to bow our knee to Fifty Shades—we win.

And if we have to take a hit or two for that, so be it.

It’s a fight worth having…

It’s a cause worth fighting for…

It’s a risk worth taking… 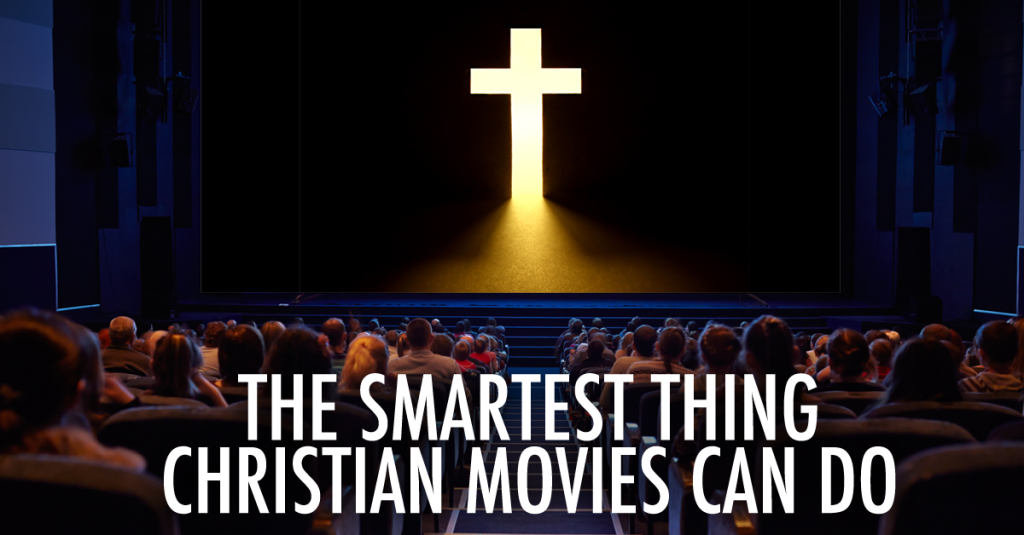 Without a doubt, of all the press that has circulated in the six weeks or so since we announced the theatrical release of Old Fashioned on the same weekend as Fifty Shades of Grey (Valentine’s Day 2015), a blog entry by Scott Beggs over at Film School Rejects remains one of the most thoughtful, balanced, and convicting…

In it, the author strongly affirms our marketing strategy:

… choosing sides can have a powerful psychological effect, and Swartzwelder has effectively thrown the challenge down in a way that tacitly paints people who go to his movie as being one way and those who pick Goliath as being another. Those who don’t desire more from love and those who do. It’s an incredibly shrewd and clever move, and you can imagine more faith-based projects in the future making direct appeals within the scope of a mainstream, Hollywood giant.

He goes so far as to actually call our Fifty Shades counter-programming angle “the second smartest thing Christian movies can do right now.”

And while I personally appreciate the kudos on our release date savvy, what really hits home is Mr. Beggs’s follow up:

So what’s the smartest thing a Christian movie could do? Be good.

Boom.  He couldn’t be more right and I couldn’t agree more intensely.  The word “good” is subjective, of course, and the measure is relative, in my estimation.  An indie film with a budget a far less than a million dollars and a blockbuster with a budget of $100 million plus can both be good movies… albeit in different ways, most likely.

Regardless, his point is well taken.  He continues:

… the hallmarks of great, non-hammer-to-the-head storytelling have not found their way into faith-based filmmaking yet (unless you count movies like The Book of Eli, Noah and most of The Blind Side). At least not this particular, indie-focused subsection. Sure, there’s evidence that more people want “Christian values” in more movies (in whatever myriad ways they personally define them), but until Christian filmmakers learn nuance and symbolism to communicate those values, they’ll be preaching to the converted.

This is a smart guy.  I’ve never met him, but he is dead on.  And please know, I’m not afraid of messages in movies (and they all have them, no matter what anyone says), but good messages aren’t enough.

Yes, I am a person of faith and I believe in and love God… but I also love good movies, good art.  And I appreciate a wide variety of films from all over the world… just as I also very much appreciate this blogger’s call to excellence.  It should be heeded by anyone endeavoring to tell cinematic stories, filmmakers of faith and otherwise.

So, will Old Fashioned measure up to Mr. Beggs’s standard?  Are we “smart” enough to qualify for number one on his list?  Only time will tell.  He’s right in calling us out, whatever the case may be.  One thing I can assure you is that a very talented team poured every ounce of themselves into making not just a “good Christian movie” but a good indie movie, period.

It was never about a cash grab or exploitation.  Never about an agenda or propaganda.  It was about telling a dramatic and entertaining story in which we believed fully… to the very best of our ability…

For the next blog, I’ll be turning the page and moving on from the subject of Old Fashioned v. Fifty Shades of Grey (at least for a little bit), but first…

A quick follow up to my last post, which was only half of the story.  The other half is that we have been genuinely overwhelmed with an online avalanche of love and support from all over the world (literally).  We are not alone.  There is quite a large, diverse, and vocal group of hopeful souls out there that longs to see a different kind of love story lifted up… in both the movies and in life.

And finally, to be fair, I was rather impressed by how equitable and objective a good portion of the press coverage actually was.  Here is a small sample of what followed our Variety announcement:

This is all incredibly encouraging.

One, because it renews my faith that “the better angels of our nature” still have a fighting chance in this world.  And two, it hints at the possibility that not absolutely everyone in the media has bowed his or her knee to the Fifty Shades juggernaut.

We have struck a chord.  Awakened something good, I think…

And it’s not just us Ned Flanders of the world that are pushing back or raising valid questions and concerns.  In fact, Old Fashioned may indeed have allies (for a wide variety of reasons) that travel far outside of the standard “religioso” circles.

I love this idea.  And I do believe that there are a lot of folks out there that, while they may not personally agree with me 100% on every single issue of a religious, theological, or spiritual nature, they do have a sense… a feeling… a conviction that something is askew culturally when a film like Fifty Shades is given such prominence and mainstream media attention.

Here’s to the “better angels” in all of us…

Okay, it was just in Variety so I guess that makes it official: Old Fashioned is being released the same weekend as Fifty Shades of Grey.  Valentine’s Day weekend 2015.  You can read the whole article here.

But that’s not all we’ll be talking about on this blog.  We’ll be sharing stories of how Old Fashioned came into existence, giving behind-the-scenes glimpses of what went on during production, and also providing some personal insight into why the key issues that are explored in Old Fashioned are  perhaps more relevant and timely today than they have ever been.

Most of all, it will just be a chance for me to share this whole, crazy filmmaking marathon with all of you.  It will also allow me to bring some balance and clarification to a lot of the online chatter (some of it already beginning) that often misquotes or misrepresents or makes inaccurate assumptions about our intentions, motives, or beliefs.

We know we’re picking a fight here and that we’re more than a little outgunned.  Oh well, it is what it is.  We have to try…

Heard a singer on the radio
Late last night
Says he’s gonna kick the darkness
‘Till it bleeds daylight
I, I believe in love