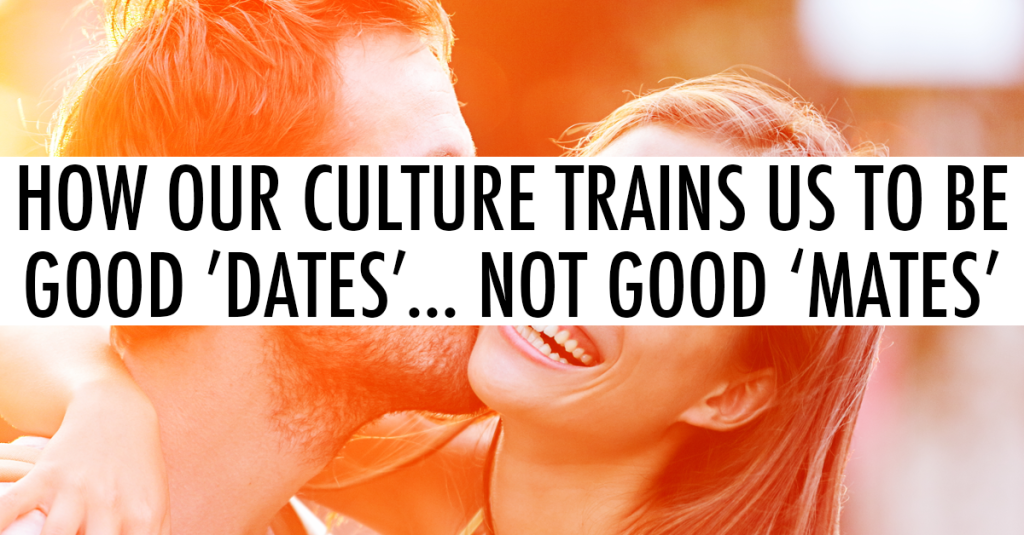 Before I sat down to write the very first draft of the screenplay that, many years later, would become Old Fashioned, I interviewed a wide variety of women…

Some single and never married, some divorced, some married… some younger, some older… some devoutly religious, some not…

I asked them all the same two questions.

First, I asked, “Describe to me your perfect date.”

The answers I got back were remarkably similar… he needs to be romantic and handsome, a good sense of humor is a plus, he better make me feel like a princess, it helps if he drives a nice car… even better if he has a good sound system in that car…

Nearly all of the answers revolved around idealistic romantic fantasy and some surprisingly superficial qualities in many ways.  Then, I asked the follow up:

“Describe to me your perfect mate.”

Again, the answers were remarkably similar… I want someone who is honest, faithful, good with children, good with money…

The two lists of responses to those two questions could not have been less similar.  And it really hit me like a ton of Valentine’s candy that, indeed—at least in American culture—we are much better trained to be good “dates” than good “mates.”

Movies and music and pop culture have deftly schooled us in how to be romantic, how to create a mood, how to woo and seduce and pose… we are experts at that stuff.  We are much less educated in how to prepare ourselves to be good life partners for another or even how to discern the qualities in another that would make for a good life partner for us.

That reality very much helped shape the story of Old Fashioned and the odd and curious character of Clay Walsh, especially… the kind of guy that could easily be passed over today for being a little too—in a word—boring.

Well, according to some recent scientific research, it now turns out that guys like that might not only lead to greater happiness in marriage, but also more successful careers!

No, I’m not making this up.

In a recent article in The Washington Post, Elahe Izadi boldly stakes the claim: Want to get ahead in your career?  Marry a dork.

Based on a new five-year study in Australia, it seems like our cultural over-emphasis on physical chemistry, personal charm and charisma, and/or our conditioning to be drawn to the “bad boy” or the “bad girl” may, in fact, not be the best recipe for relational bliss…

The study’s findings may have broader implications when it comes to picking partners, said Joshua Jackson, an assistant professor at Washington University.

“This might be something to suggest that people maybe should be attuned to these conscientious, more dorky, not-as-lively-or-exciting-because-they’re-rule-following people,” said Jackson, the study’s lead author. “There’s something to say in terms of the characteristics you should look for in a mate. This might not be the most obvious, but it’s important.”

So, look, next time you’re on a date, don’t write off the boring rule-follower so quickly. You may be writing off career advancement, too.

All joking aside, whether or not it leads to career advancement or making more money, when it comes to romance… it makes sense to take the time to look more closely than just the surface.

As it says in Proverbs, “Charm is deceptive and beauty is fleeting…”

Learn more about the study here.