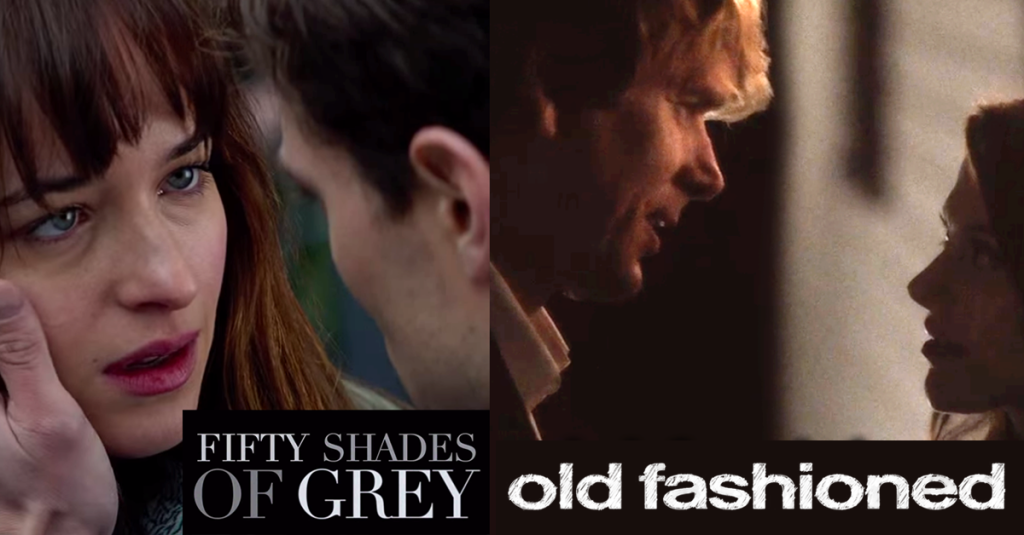 To repeat, just for the record, it has been over a 10-year journey getting Old Fashioned to the silver screen.  Not an uncommon story in the making of many films, but still…

From the initial idea to eventually writing the script and raising the money… all the way up to learning that Fifty Shades of Grey was releasing their film as a mainstream, romantic date-night movie… and deciding to wait and release our film on the same weekend—Valentine’s Day 2015.

I mention the time frame—again—because it’s important to reiterate that Fifty Shades of Grey wasn’t even on our radar during the years we were developing and financing Old Fashioned.

We didn’t set out to make Old Fashioned as a response to any other book or movie… we were simply trying to craft a love story that was God-honoring and took a counter-cultural approach to many of the sexual mores of contemporary American society.

Even so, when the opportunity arose to release our film at the same time… well, that was and is a deliberate choice for which we make no apology.  We think it’s a great chance to engage culture in a discussion about that world we are creating, for ourselves and those that follow.

And this opportunity only became available to us because of… timing.  And, more specifically, I would say… God’s timing.

All the delays, struggles, “almosts” and the wide variety of hurdles we had to overcome to get our film made and ultimately released in theatres nationally—the very kinds of things that can easily make one question God—I now honestly believe were all placed there by God.

“For such a time as this” as the Scripture goes.

The big, seductive, cinematic ad entices.  And it’s everywhere.  Fifty Shades calling out to all those who walk by… including families with little children, young girls on the brink of womanhood, high school boys looking for role models, married couples getting bored with each other…

We live in a sex-obsessed culture.  It is undeniable.  Hooking up has virtually become a national pastime.  We worship physical beauty and pleasure and amusement and anyone who denies that just isn’t paying attention or is being willfully blind.  I’m not saying that it’s worse than any other time in human history, but it is increasingly becoming more obvious and with the unending advance of technology, increasingly relentless and hard to avoid.

All that said, throwing stones at the obvious doesn’t really help anyone.

And the truth is that we also live in a time when any kid with access to a computer and no parental supervision can see—in about three seconds—far worse than whatever the film version of Fifty Shades will offer.

So what’s the big deal?

As I’ve commented before, it’s precisely the coy, cultural grin and collective “no big deal” attitude and embrace of Fifty Shades that is what sets it apart—especially once they made the decision to release the film on Valentine’s Day and mass market it as an aspirational romantic option.

We live in a free society, and I’m grateful for that.  No one is calling for censorship or a boycott or anything like that at all.  We are merely exercising our right to challenge the status quo and offer up a choice that—we believe—considers a more beautiful and noble way of approaching love and romance.

The stories to which we give our time and money and lift up for adulation… those stories will eventually shape who we are and what we become.  That’s a sobering thought.

When it comes to racism and bigotry in film and literature… the importance and power of this is (thankfully) realized universally.

But what do we really want for ourselves, romantically?  What do we truly hope for those that are closest to us, that we care most about?  What kind of legacy do we want to leave for those that follow?

We’re not saying that Old Fashioned is perfect or that everyone has to agree with every choice made by Clay and Amber (the very human and flawed lead characters in our film), but our story is one that is honestly searching for more than exploitation or objectification… and that matters.

This Valentine’s Day weekend is a chance to make a statement.

We hope and pray you will join us in our David v. Goliath stand-off against a cultural juggernaut that has way more in terms of money and media access than we can even imagine.  We sure can’t do it alone…

You can find our current list of theatrical markets here.

Chivalry can indeed make a comeback… if enough people genuinely want it to.